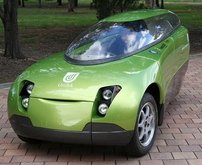 Meet Trev, the two-seater renewable energy vehicle; designed and built by staff and students at the University of South Australia.

Trev uses less than 1/5 of the energy required by a conventional car and can be recharged using clean electricity from renewable sources such as solar power.

Trev is a featherweight – weighing in at only 300 kilograms. The team who built the car feel “using a 2.5 tonne vehicle for commuting is ridiculous.”

Unlike some of the other electric cars recently developed for commuting, the two-seater will achieve a top speed of 120 km/h; and has a stunning 150 km range under city conditions. It takes 3-4 hours to recharge Trev from a normal outlet and that can be reduced to just over an hour with a high-power outlet.

The rear wheel is driven by a 6000 rpm electric motor through a two-stage belt transmission. The electric motor provides 0–100 km/h acceleration in under 10 seconds and charge is stored in a 45 kg lithium ion polymer battery. The battery is expected to be good for 250,000 kilometres.

Trev’s energy consumption during the Greenfleet Technology Class of the World Solar Challenge was a mere 6.2 kWh/100 km while averaging speeds of 80 – 90 km/h during the trip.

Team Trev will drive the car around the world in the 2010 Zero Race and hopefully we’ll see direct descendants of Trev on Australia’s roads soon. The prototype cost around $40,000 to build, very cheap by electric car prototype standards, with the battery comprising a quarter of that cost. Mass production of such a vehicle would see those costs plummet.