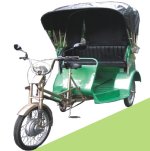 With the end of the Winter Olympics in sight, some sports fans’ thoughts are probably already turning to the Commonwealth Games  to be held in New Delhi, India between 3 October and 14 October 2010.

The games will be the largest multi-sport event conducted to date India. As with any such major event attracting multitudes of people from around the world; the environmental impact will be high.

As a way of reducing greenhouse gas emissions associated with transport, in a joint project between the Delhi government and the Council of Scientific and Industrial Research (CSIR), 1,000 solar powered rickshaws will ferry competitors around the Games villages and to assist them in reach sporting venues from public transport stations.

The Soleckshaws are a form of Pedicab, a pedal-operated and motor assisted zero-carbon emission, urban transport vehicle.  The speed of a Soleckshaw matches a powered vehicle in downtown traffic conditions; around 10-15 km/hr.

While there are no solar panels on the rickshaw itself, each Soleckshaw carries a deep cycle battery that is recharged from a central recharging station which is powered by solar energy. The rickshaw motor is a  240 watt, 36 volt BLDC type Hub Motor  located on the front wheel.

The Soleckshaw’s use will not be confined to the 2010 Commonwealth Games. The CSIR sees the event as a demonstration project and is looking toward wider implementation as a “a sustained effort to utilize the fruits of cutting-edge science to improve the quality of life of 800 million Indians, who are at the bottom of the ‘pyramid of quality of life’.”