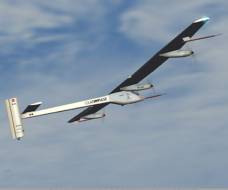 Thousands of well wishers and the curious followed the first full night journey for a solar powered aircraft today.

The plane, Solar Impulse, charged itself during a day flight via its 10,748 solar cells and a 400 kilogram deep cycle battery bank; then flew on into the European night.

Piloted by Solar Impulse’s inventor, André Borschberg, the journey was certainly no mean feat, with a 10-hour period where temperatures plummeted to -20 degrees Celsius in the cockpit.

Cruising at a maximum altitude of 28,000 feet, just short of Mount Everest’s height, another issue emerged – excessive oxygen use due to interviews André was giving during the flight. As a result,  mission control orders to André were to "shut up and fly."

And fly the 61 metre wingspan craft he did, into the record books – with power to spare; thanks in part to 4 and a half hours of the overnight leg being powered by "potential energy", meaning no direct solar power from the sun or from the batteries, but just lift from a slow descent.

According to the Solar Impulse blog, at 04:30 GMT+2,  André Borschberg said he would make it through to sunrise, with enough spare power to "cook himself a full English breakfast and a pot of Earl Grey". At that point, Solar Impulse had over 6 hours flying time left in its solar-fuelled batteries with sunrise just over an hour away.

By 06:00 GMT+2 the sun had risen in Switzerland, and Solar Impulse became the first solar-powered airplane to fly through an entire night – and much of it captured in real time for all to see, courtesy of the Internet.