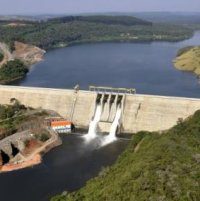 At a news conference late last week at the Federation of Industries of Rio de Janeiro (Firjan), Minister Braga said the Ministry of Mines and Energy intends commencing pilot tests of solar power generation in hydroelectric dams within four months.

Far from just dabbling in floating solar technology, the first floating PV power station will be huge – 350MW capacity. Electricity produced by the facility is expected to cost between approximately AUD $90 and $101 per megawatt hour.

Built between 1985 and 1989 to provide a renewable electricity supply to the city of Manaus, the Balbina hydroelectric plant has been a controversial project. In addition to the loss of habitat that occurred with its construction, it’s claimed that methane released from the massive reservoir, which covers 2,360 square kilometres, means the facility emits more greenhouse gases than most coal plants. The hydroelectric capacity of Balbina is 250MW.

Brazil is no slouch when it comes to renewable energy. Spurred on by the oil shocks of the 1970’s, the nation turned to alternative energy; primarily from hydro and sugarcane ethanol. Renewables accounted for more than 85.4% of the domestically produced electricity used in Brazil by 2009.

According to the International Energy Agency (IEA), Brazil has set the following renewable energy targets out to 2019

Floating solar farms have been rapidly gaining popularity around the world – they solve issues relating to land usage, reduce water evaporation and the growth of algae. The water also helps to keep the solar panels cool, boosting conversion efficiency.

Closer to home, a floating PV facility is currently being constructed at Jamestown in South Australia’s mid-north region; which is expected to be operational next month.