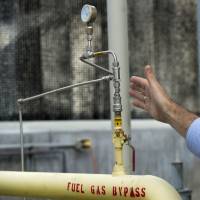 In a process known as power-to-gas (P2G), surplus energy from wind and solar farms is used to separate hydrogen from water through electrolysis. It can then be blended with natural gas and injected into existing gas pipelines and used to drive power stations or stored as a renewable fuel.

Several P2G systems are in operation across Europe and Canada, but the UCI project is a smaller, proof-of-concept design, funded by local utility Southern California Gas Co. and installed at the campus gas power plant.

Researchers will monitor the system to establish if the technology could be used on larger, state or regional grid networks.

“One of the big challenges we’ve faced in adding wind and solar to the grid is what to do with the excess electricity,” said Jack Brouwer, associate director of UC Irvine’s Advanced Power & Energy Program.

“We’ve shown you need not halt renewable power generation when demand is low. Instead, the excess electricity can be used to make hydrogen that can be easily integrated into existing natural gas pipeline infrastructure.”

The technique relies on an electrolyser, provided by gas generation company Proton OnSite, which splits water into hydrogen and oxygen. The system expels oxygen into the atmosphere, while the trapped hydrogen is compressed and funneled along 60 feet of pencil-thin steel tubing to an injection point along UCI’s gas pipeline, where it mixes with the natural gas inside. From there it is burned to drive the campus’s gas turbine power plant, generating heat and power. 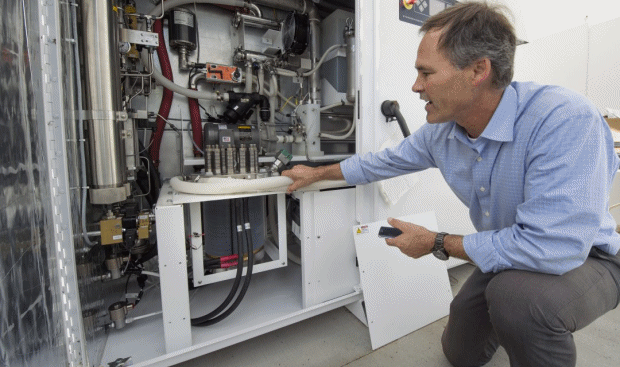 With the new system in place, a group of UCI graduate students will use it to study the effects of related science, such as how hydrogen transport affects natural gas pipelines, and methanation – a method for of combining atmospheric carbon dioxide with renewable hydrogen to create clean fuel.

“Our initial testing indicates smooth operation for this first successful U.S. proof of concept,” said Brouwer. “Storage of the hydrogen in existing natural gas infrastructure could produce a massive hydrogen battery that could become the most important technology for enabling a 100 percent renewable future.”