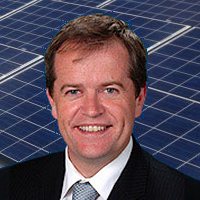 “Every Australian deserves the chance to benefit from the rise of renewable energy, wherever they live,” Mr Shorten said.

“Renewable energy is putting millions of households and tens of thousands of small businesses back in control of their power bills.”

Labor will provide $98.7 million over four years to establish the Community Power Network. The funding includes more than $16.0 million annually in competitive grants for community groups to pilot new approaches and demonstration projects in community housing, which will act as reference cases for rollout nationally through the Network.

The party says modelling undertaken by Marsden Jacobs and Associates has determined community energy projects could leverage $17 of community funding for every $1 of government funding.

The Community Power Network is part of Labor’s goal of ensuring 50% of the nation’s electricity is sourced from renewable energy by 2030.

The party says it will provide greater certainty and flexibility for the Clean Energy Finance Corporation, and deliver more funding for the Australian Renewable Energy Agency (ARENA).

It will also see the Commonwealth lead by example as a direct purchaser of renewable energy.

“A strong renewable energy sector will be at the centre of Labor’s response  to the challenges of climate change,” states a policy document.

As we reported earlier today, politicians tapping into support for renewable energy in Australia is a wise move, with favourable policies having the potential to be vote-shifters. However, the major parties have yet to pledge any direct support for the purchase of residential battery systems.