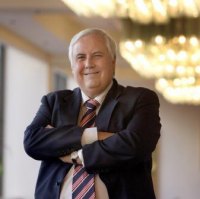 Clive Palmer has said there is “no chance” Palmer United Party will strike a deal with the Government on the Renewable Energy Target (RET) and that Prime Minister Abbott should now give up on his attempts to slash it.

“They’re going to look stupid anyway because they’re not going to get it changed,” Mr. Palmer told the ABC.

Mr. Palmer’s comments follow news yesterday that the ALP has walked away from RET negotiations.

While no deal may be better than a bad deal, it still leaves the renewable energy industry – particularly the large-scale sector – in limbo and the jobs of 21,000 workers are hanging in the balance.

“It’s critical that the government resolves the current impasse as quickly as possible to give the thousands of businesses and tens of thousands workers in the industry a clear future,” he said. “The renewable energy sector is completely frozen until this can be resolved.”

Mr. Thornton says if the government was somehow able to reduce the future target by more than 60 per cent, it would decimate the renewable energy industry and risk $10 billion worth of investment already made in good faith under the policy.

In Western Australia alone, $1 billion of renewable energy projects and thousands of jobs were at risk due to the current situation according to the WA Renewable Energy Alliance.

Labor leader Bill Shorten said it was only last year Australia was rated one of the four most attractive places to invest in renewable energy; alongside China, the US and Germany.

“The uncertainty caused by Tony Abbott reneging on his commitment to the Renewable Energy Target has already seen Australia to go backwards, to tenth in the world. On top of that, Tony Abbott wants to abolish the Australian Renewable Energy Agency and the Clean Energy Finance Corporation. Labor will fight for real action on climate change and a strong future for renewables in Australia.”