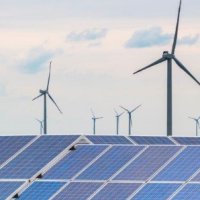 The DP Energy project seeks to construct up to 59 wind turbines and up to 400 acres of solar panel arrays at a site approximately 8 kilometres from Port Augusta; which is around 300 kilometres from South Australia’s capital city; Adelaide.

The company says the attributes of the site – an early evening peak for wind power and midday peak for solar – mean the generation profile of the facility can be tailored to provide a close match to the demand cycle.

The output capacity of the Park has grown considerably since it was first announced – from 300MW to up to 375MW; which is enough to power around 154,000 South Australian households. The project would avoid around 430,000 tonnes of greenhouse gas emissions each year.

The facility will have a wind generation capacity of 206.5MW, with the remainder being solar PV spread equally among three solar farms. It’s expected up to 1.6 million solar panels will be used.

Up to 100 kilometres of underground cabling will be laid throughout Port Augusta Renewable Energy Park and the site is only 3km from Davenport substation.

Should the project be approved, construction would likely start in 2017 and last around two years. During the construction phase, approximately 600 full-time jobs will be created and the project will bring more than $44.5m of construction expenditure into the Port Augusta regional economy.

Once fully operational, at least 20 full time jobs will be created. Annual operational-related expenditure once up and running is expected to exceed $3 million locally/regionally and $4.6 million at state level each year for the estimated 25 year life of the Park.

DP Energy says various dedicated environmental assessments have been carried out and that with proposed mitigation measures, environmental impacts of construction and operation will be avoided or minimised.

A copy of the Executive Summary for Development Application can be viewed here (PDF) and the full submission is here.

The Public Notification period commenced on January 27 and ends on March 4, 2016.