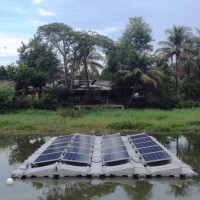 The REC Peak Energy solar panels installed on many rooftops in Australia are so tough they can also be used in floating solar farm applications.

Floating solar farms are becoming increasingly popular around the world. In addition to preserving land, floating solar panel arrays help to reduce the growth of algae in dams and minimise evaporation rates.

Indonesia is a new and emerging solar market and while it has plenty of rooftops, land suitable for larger scale solar installations is at a premium.

The panels have been mounted on Hydrelio pontoons. The lightweight, UV-resistant floats are easy to deploy, dismantle and are 100% recyclable. Constructed of high-density polyethylene (HDPE), Hydrelio pontoons can used on drinking water reservoirs.

The 5 kilowatt installation features 20 REC Peak Energy Series panels, which are expected to generate 6.7 MWh of electricity annually and avoid an equivalent of 5.8 tonnes of carbon dioxide each year.

“Stringent tests have confirmed REC’s Peak Energy solar panels to be suitable for deployment at floating solar installations. The high standards of reliability, performance and quality are consistent with the rooftop and ground-mounted installations,” said Torgeir Ulset, REC’s Vice President for Sales and Marketing in Asia-Pacific.

” With a reliable power output and high quality standards, adopters of floating solar installations can be assured of the long-term performance of their REC solar panels. Therefore, REC extended its product and performance guarantee to floating applications.”

REC solar panels have been a popular choice for Australian residential and commercial solar installations since Energy Matters introduced the modules to the local market in 2010. The high-efficiency modules feature in Energy Matters’ Platinum range of solar power systems for domestic applications.