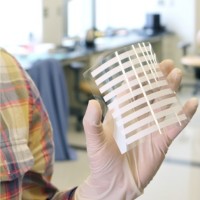 Homes of the future could be equipped with solar curtains and flexible tiles capable of capturing and converting not just sunlight, but also indoor lighting into usable levels of electricity.

It’s a goal scientists from the USA’s Virginia Tech University believe they are close to making a reality.

The modules were created by depositing a film of titanium oxide as part of a five-layer cell structure to create a single lightweight and flexible dye-sensitised solar tile. Individually, each tile can produce around 75 milliwatts of power – but they can also be connected in a series, meaning a panel of tiles the size of an A4 sheet of paper could easily charge a typical smartphone.

“First, it can be manufactured easily at low temperature, so the equipment to fabricate the panels is relatively inexpensive and easy to operate. Second, the scalability of being able to create the panels in sheet rolls means you could wallpaper your home in these panels to run everything from your alarm system, to recharging your devices, to powering your LED lights.” 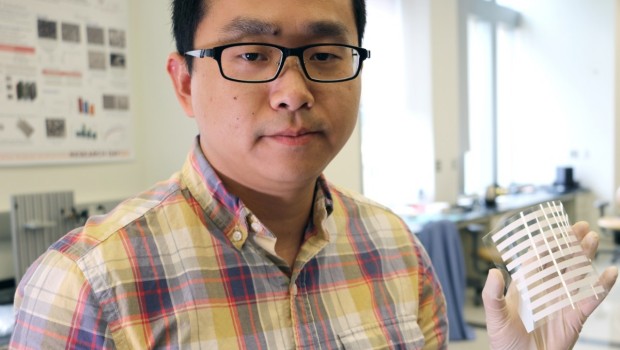 Unlike the silicon solar cells used in conventional solar arrays that only work with sunlight, the layered configuration of the dye-sensitised solar tile allows it to also capture diffuse light from sources such as LED, incandescent and fluorescent bulbs; at efficiencies approaching that of heavy amorphous silicon cells.

At a large panel level the tiles have yet to reach the efficiencies of solid-state silicon. But Priya maintains that with more research, it is likely the new flexible panels will overtake their rigid cousins soon.

“Amorphous silicon is a fairly mature technology running at about 13-15 percent efficiency,” he said. “Our panels right now operate around 10 percent at the panel size. At smaller, less-useful sizes, the efficiency increases, and so we can see a potential for much greater energy collection efficiencies.”

In a paper to be published in the December issue of the journal Solar Energy Materials and Solar Cells, the team describe how these flexible panels could manufactured in any design, from curtains and tiles to solar charging plates in military uniforms and backpacks. The latter are areas Priya’s lab is actively pursuing in conjunction with the U.S. Army’s Communications-Electronics Research, Development and Engineering Centre.