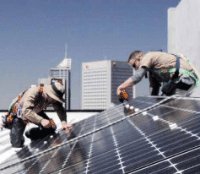 A recent poll again confirms Australians want to protect the Renewable Energy Target – and that the Government’s Direct Action policy is generally viewed as a bit of a dud.

Do you think this target of 20% renewable energy by 2020 is too high, too low or about right?

32% of respondents said the current renewable energy target is about right, 33% feel it is too low and just 8% believe it is too high. This question was also asked in July 2014 and since that time the number of people believing it is too low increased 4 points and those thinking it is too high dropped 5 points.

61% of Greens voters and 43% of Labor voters think it is too low – but also 19% of Liberal/National voters. Only 11% of Lib/Nat voters believed it was too high.

While encouraging, the question could have been a little more focused. The Renewable Energy Target was legislated at 41,000 GWH; which at the time was estimated to be 20% in 2020. However, electricity consumption hasn’t increased as much as expected and this is part of the government’s argument in attempting to reduce the target in terms of gigawatt-hours.

On a related topic, those polled were also asked which of 4 actions on climate change listed they would most support.

Funding for renewable energy came up trumps by a large margin (45%). An emissions trading scheme was next (11%) and the Government’s direct action policy just 10%.

The most recent poll also revealed that a majority of Australians certainly don’t believe “climate change is crap”. 54% indicated a belief climate change is happening and is caused by human activity. 15% percent were unsure.

The Australian Solar Council’s John Grimes points out that “even Crosby Textor, the chief pollsters for the Liberal Party, reported how much Australians love solar with an incredible 82% “favourable” towards solar panels.”