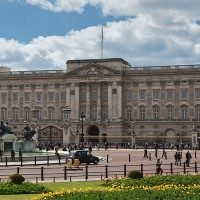 The Queen might be saving some bucks on boiling the kettle in the future with the installation of solar panels on Buckingham Palace.

Buckingham Palace has a long history, but it didn’t become the principal royal residence until 1837; which was when Queen Victoria ascended the throne.

The core building itself is far older (17th century) and is certainly showing its age.

It’s an awfully energy-inefficient building too – Buckingham Palace was dubbed the UK’s least energy efficient home by a group of energy surveyors; who gave it a score of 0 out of 10.

There have been attempts in the past at improving energy efficiency. Some of the building’s heating and hot water is produced by a combined heat and power plant and boilers, which were implemented in 1994-95. Energy efficient LED lighting is also being trialed across the estate.

Energy efficiency attempts have been a bit like a band-aid across a gaping wound. In 2013, energy bills for the Palace hit a reported £3.1million for the year.

However, Buckingham Palace may be about to undergo a ten-year refit at an estimated cost of £369m; with energy efficiency a consideration. The work will primarily be carried out to mitigate the current threat of serious fire and water damage, but solar technology will also get a look-in.

“If planning permission is granted then Buckingham Palace will have solar panels fitted onto the roof as part of the major overhaul of the iconic building,” states the UK’s iTV.

The massive renovation will go ahead if approved by the UK Parliament.

It’s not clear what Queen Elizabeth’s personal opinion of solar power is, but her son Prince Charles is certainly a fan.

In 2010, the Prince was granted permission to install solar panels on the roof of his 180-year-old home, Clarence House.

In 2015/16, 84% of energy (including green gas and electricity) for the Prince’s Household came from renewable sources; with 38% generated on-site. As well as Clarence House, solar panels are installed at Highgrove, which also features ground- and air-source heat pumps.

In 2015/16 the Prince’s Household says it slashed greenhouse gas emissions from sources under its control by 20 per cent.