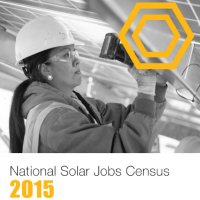 The U.S. solar workforce grew to a total of nearly 209,000 last year; adding more than 35,000 workers – the third consecutive year in which growth exceeded 20%.

The Solar Foundation’s National Solar Jobs Census 2015 states the workforce has increased by 123% since 2010.

“The solar industry has once again proven to be a powerful engine of economic growth and job creation,” said Andrea Luecke, President and Executive Director of The Solar Foundation. ” Our Census findings show that one out of every 83 new jobs created in the U.S. over the last 12 months was in the solar industry – 1.2% of all new jobs.”

The USA’s solar workforce is now three times the number employed in the coal mining industry and also larger than the oil and gas extraction industry.

In addition to direct employment, the US solar industry supports an additional 610,650 ancillary jobs throughout the supply chain.

When the first Census was run in 2010, the USA had installed 929MW of solar capacity that year. Last year, 7,430MW of capacity was added.

The installation sector represented the bulk of  jobs in the US solar industry in 2015.

Employment in all sectors grew in 2015, with the exception of solar manufacturing. However, manufacturing jobs are expected grow by 3,800 positions in 2016; supported by industry construction activity.

Approximately 90% of all solar workers are 100% dedicated to solar activities; a percentage that has been effectively unchanged since 2013.

Jobs in the solar industry continue to pay above the median wage of all occupations in the USA.

Looking ahead, a further 14.7% increase in positions is expected this year – an extra 30,000 jobs – bringing the total of U.S. solar workers to 239,625 by the end of 2016. It could perhaps be even higher as Census data collection was completed before the extension of the 30% Federal Investment Tax Credit (ITC) was announced.