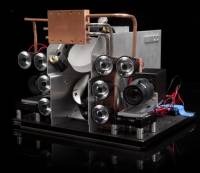 Solar power + lasers + cutting edge software = dead mosquitoes. Does tech get any cooler than this?

Mosquitoes in some parts of the world carry a deadly payload – malaria, a parasite that kills more than 600,000 people each year. While malaria isn’t endemic in Australia, mosquitoes are carriers of other debilitating conditions that occur here, such as Ross River virus, Barmah Forest virus and dengue fever.

Even the mosquitoes that don’t carry disease are a pest – many Australians would be familiar with being kept awake at night by the high pitched whine of the mozzie, often followed by a very itchy bite.

The battle against mosquitoes is primarily carried out through the use of pesticides; something the planet could do without. Now lasers and solar power have been brought into play.

Lighting Science Group Corporation and Intellectual Ventures’ Global Good are teaming up on the development of next-generation laser systems that zap mosquitoes while leaving other flying insects unharmed.

Based on Global Good’s photonic fence invention, the system uses low-cost sensors and laser technology with software to identify, track, and eliminate insects.

Lasers are generally power-hungry devices, but on this scale, they can be energy sippers. The system will be designed to run off solar panels and a deep cycle battery system.

Referred to tongue-in-cheek as a WMD (Weapon of Mosquito Destruction), apparently the device works effectively at a range of approximately 30 meters. The system has some pretty amazing technology behind it; for example, the software can even detect the gender of the mosquito. This is important as only female mosquitoes bite. Reduced zapping means less power required and less wear and tear on equipment.

“What began by putting the world’s deadliest animal, the mosquito, in our sights with a laser, has opened up new advances in the way we can use light to protect communities and crops from a range of disease-bearing insects,” said Maurizio Vecchione, senior vice president for Global Good and Research at Intellectual Ventures. “For example, the export potential of high-value crops could increase dramatically if a light-based perimeter was available to both monitor and eliminate pests, instead of possibly unsafe or ineffective insecticides.”

Under the terms of the research agreement, Global Good will license photonic fence technology to Lighting Science; which will manage product development in both vector control for malaria and derivative inventions in agricultural systems.

According to Wikipedia, the mosquito laser concept was first put forward in the 1980’s by astrophysicist Lowell Wood, but it wasn’t until 2007 when serious research began after Intellectual Ventures resurrected the idea.

Global Good is a collaboration between Intellectual Ventures and Bill Gates. Its mission is to invent technology that improves the standard of living in developing countries.