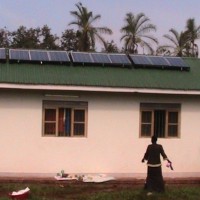 An oxygen concentrator system powered by the sun has been put to good use in Uganda and could save many lives around the world.

Children with severe pneumonia required concentrated oxygen until antibiotics administered begin to kick in. Concentrated oxygen is widely available in hospitals in developed countries, but in nations such as Uganda it’s a different story; particularly in rural areas.

In these locations, bottled oxygen can be scarce and power to run oxygen concentrators is often unreliable; with some areas having multiple and lengthy blackouts each day. Due to this and other complications, pneumonia remains a leading cause of death in children around the world.

In an effort to address this problem, Michael Hawkes, an assistant professor in the University of Alberta’s Division of Pediatric Infectious Diseases, and his colleagues set out to harness the power of the sun.

With the assistance of a Grand Challenges Canada grant, the team set up solar powered oxygen delivery systems at  Kambuga and Jinja hospitals.

The solar panels generate electricity for the oxygen concentrator, also known as an oxygen generator, that purifies air and strips out the nitrogen (which makes up 78% of the air we breathe). Battery storage enables the concentrator to be run at night and during unfavourable conditions.

A pilot project involving 28 children was deemed a success. Further study of the system indicated solar-powered oxygen delivery works equally as well as the conventional method of cylinder-based oxygen delivery.

“Solar-powered oxygen is using freely available resources—the sun and air—to treat children with pneumonia in the most remote settings,” said Professor Hawkes. “It’s very gratifying for a pediatrician doing research in a lower-resource setting to fill a clinical gap and save lives. It’s what our work is all about.”

The team is now working towards a goal of having similar systems installed in 80 hospitals across Uganda.

A paper on the system, “Solar-powered oxygen delivery: proof of concept”, has been published in the journal The International Journal of Tuberculosis and Lung Disease.