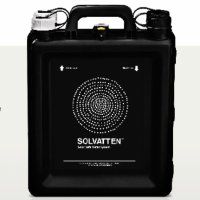 It looks like a fairly ordinary plastic jerry can for water; but using the power of the sun and some clever but simple technology, Solvatten makes contaminated water safe to drink without the use of chemicals – and heats it as well.

The Solvatten unit opens like a book into separate 5 litre containers. When water is poured into each side, it first passes through a replaceable 35 micron mesh fabric filter that removes large particles.

Each side of the black container has a transparent face constructed from durable plastic. This allows for the penetration of UV-B light; which kills pathogens.

Depending on conditions, the water is pathogen-free after 2-6 hours in direct sunlight and piping hot; up to 75°C.  Solvatten also includes an easily-deciphered signal that indicates to the user when the water is good to go – a sad, red face changes to green and happy.

It’s a simple device, but sturdy and should last for 7 – 10 years, with only the fabric filter needing changing occasionally.

The impact of Solvatten in the communities where it has been distributed is quite remarkable.

A study found a reduction of the prevalence of diarrheal disease from 27% to 11.6% among children under 5 years old in a village where the device was used.

According to the Center For Disease Control, diarrheal diseases account for 1 in 9 child deaths worldwide. Even in cases where children don’t die; these diseases can impact on childhood growth and cognitive development.

Solvatten also has a positive impact on carbon emissions and deforestation. In villages where contamination is an issue; water is often boiled – requiring firewood. The same applies for hot water for washing, bathing and cooking.

More than 40,000 Solvatten systems are currently being used each day by more than 200,000 people around the world.

Solvatten has a donation program where a contribution of €30 (around AUD $45) will provide for a family’s (5-6 persons) water needs for years.

Solvatten could also be a handy tool for campers here in Australia. While focusing on supplying developing nations, the device is apparently available for purchase by personal buyers direct from Solvatten (a price wasn’t visible on the web site).