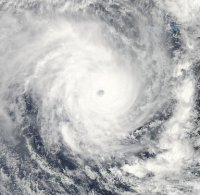 Australia’s Solar Energy Industries Association Inc. (SEIA) is calling on local industry to donate redundant solar components, which will be used to assist the people of Vanuatu recover after Cyclone Pam.

Cyclone Pam’s destructive force impacted approximately half the country’s population. 50-90% of homes across the nation were damaged, along with critical infrastructure. Pam had the highest 10-minute sustained wind speed of any South Pacific tropical cyclone and slammed into Vanuatu with sustained winds peaking at 250 km/h.

According to the SEIA, the idea of assisting Vanuatu residents with solar power cropped up even before Cyclone Pam hit.

Like many island nations, not all residents have access to mains electricity and for those that do, the costs can be very high. Vanuatu has always been highly dependent on imported fossil fuels for power generation and diesel accounted for 84% of the nation’s power in 2010. Only approximately 28% of Vanuatu households had access to electricity; even before Cyclone Pam.

It’s this backdrop that spurred Rob Taber from New England Solar Power to propose a project to improve the living conditions for the poorest and most isolated people living in Vanuatu with solar. The idea gained the backing of all SEIA members and is now active.

The SEIA is appealing to all Australian solar businesses to commit to donating redundant stock or fully operational second hand equipment that can be used to build and install off-grid solar systems.

” PV modules, batteries, regulators, chargers, just let us know what you can donate. If you wish to donate cash instead, again, please let us know. We are currently organising a central storage point, and once it has been confirmed we will get back to everyone who has offered to donate some items,” says a statement from the organisation.

For further details or to offer donations, email admin@seia.org.au.

SEIA was formed in 2007 in response to demand from within the industry and represents all the various interests and concerns of Australia’s solar industry.

On a somewhat related note, the robustness and value of solar in storm conditions was recently demonstrated.

According to RenewEconomy, when category three Cyclone Olwyn recently tore through the Western Australian towns of Exmouth, Coral Bay and Carnarvon, it left many power blackouts in its wake. However, on Thevenard Island, where a solar-hybrid mini grid was recently installed; the system not only survived the storm, but continued running throughout thanks to stored battery power.