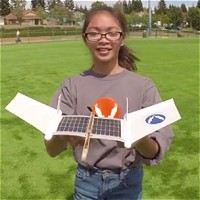 Devices such as the iPad can be great educational tools, but the solar powered Volta Flyer is a more hands-on affair that could help inspire a new generation of solar professionals – and provide a little exercise as well.

The kit contains  prefabricated parts that can be assembled in as little as 20 minutes without special tools or glues.

The plane is powered by a thin-film flexible amorphous silicon solar panel. Instead of a conventional battery, the Volta Flyer has two 6 farad capacitors.  A capacitor is an electrical component used to store electrical energy temporarily in an electric field. While the capacitors used don’t store a lot of energy, unlike conventional batteries these should never need changing.

The plane is charged by angling the solar panel towards the sun for 90 seconds. A button is then flipped for a bit of boost and the Volta Flyer is hand launched into the air. The plane is built to withstand crashes too – all major components are designed to separate on heavy impact rather than break; then it’s just a matter of plugging them back together.

The craft can be adjusted to fly in tight or large circles and lands itself after a short time once its power is depleted.

Making learning fun and interesting has always been a key to successful education.

“Hands-on research provides the kind of knowledge that students are likely to internalize because they are mentally and physically invested in it,” say its makers.

The Volta Flyer is one in a series of science projects for kids developed by ToyLabs to support STEM education (Science, Technology, Engineering and Mathematics). One of its other creations is the Volta racer solar car; which helps children learn about Newton’s Laws, simple circuitry, renewable energy and calculating speed and distance.

The Volta Flyer not only looks like a fun educational toy for kids, but adults might get a kick out of it as well. Unfortunately, it won’t be available in Australia in time for the holidays – a Kickstarter campaign is currently under way to fund initial production.

Solar Education For Kids And Teens