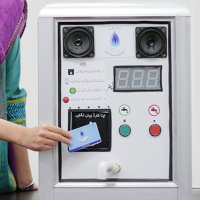 Solar powered ATM’s may soon be delivering clean water in the Punjab region of Pakistan.

Punjab was once one of the most fertile areas on Earth. After agriculture with a focus on water intensive crops went into overdrive in the 1970’s, groundwater levels began dropping at a frightening rate.

According to the Columbia Water Center, 79 percent of the state’s groundwater assessment divisions are now considered ‘overexploited’ and ‘critical’ with extraction exceeding the supply.

Wells are running dry and what water there is can be contaminated.

Only 13 percent of Punjab’s rural population and  43 percent of people in urban areas of Punjab have access to safe tap water. With an overall population of 98 million people, tens of millions of people are living with water stress.

With an estimated 35 per cent of the country’s population lacking access to clean drinking water; this has a serious human health and economic impact. Diseases related to water, sanitation and hygiene cost Pakistan’s economy around US$1.1 billion annually.

While Pakistan’s government supplies filtered water free of cost in some areas; this is an expensive exercise and prone to waste.

An RFID card is issued to the user, who registers for the service via SMS. After authentication, an audio message is played and the machine will dispense a daily ration.

Initially to be rolled out in areas with serious water contamination issues such as Bahawalpur, Rajanpur and Faisalabad districts; eligible families will be able to collect up to 30 litres of drinking water per day.

The project is a collaboration between the Punjab Saaf Pani Company and the Innovations for Poverty Alleviation Lab (IPAL), a research center in Lahore. IPAL is seeking USD $23,500 in aid from the UK Department of International Development to enable their prototype be put into production.

IPAL plans to enhance the units with a two-SIM GSM component, so log files from the dispenser can be transmitted to a central database in real time. It also intends designing a user-interface to especially cater to the needs of low-literate, less tech-savvy users.

Water ATM’s powered by solar panels; or more accurately in this case – vending machines – are a growing source of clean water for rural villagers in India. The Sarvajal organization has built a franchised network of its “water ATMs” serving 110,000 rural customers in the country.