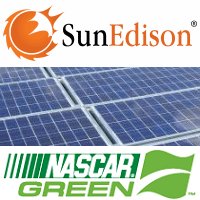 NASCAR Green seeks to reduce the motor sport’s environmental impact by promoting sustainable behavior to millions of fans and building on the use of solar technology across the sport.

As well as raising awareness in NASCAR fans of the financial and environmental benefits of solar, SunEdison plans to work with NASCAR partners, tracks and teams on implementing commercial solar solutions.

NASCAR’s use of solar goes back some years – a 3MW solar farm was constructed at Pocono raceway in Pennsylvania in 2010. The solar panels generate enough electricity to power the facility as well as around 1,000 homes in the surrounding area.

“Solar power is a proven and reliable form of renewable energy and the technology is already making a significant impact throughout our industry,” said Steve Phelps, NASCAR chief marketing officer.

Among its other sustainability efforts, NASCAR has also installed 20 EV charging stations at its offices in Daytona Beach, Charlotte and Concord for the use of NASCAR employees and guests.

In 2011, a long-term bio-fuels program was launched to reduce emissions of the fuel used in all three of its national touring series.

It seems NASCAR fans are generally aware of climate change. Four out of five fans surveyed believe the earth is going through a period of climate change and two out of three of these people support buying home solar power systems.

“SunEdison is excited to be partnering with NASCAR to highlight the benefits of solar both at and away from the race track,” said Vikas Desai, SunEdison senior vice president of residential and small commercial.