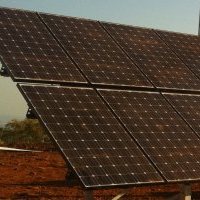 The Industrial Development Corporation of Zambia (IDC) has signed a memorandum of understanding with the International Finance Corporation (IFC) to develop an initial two 50MW solar power projects in the country.

These projects will likely be the first of many. Zambia’s President, Edgar Lungu, has directed the IDC to develop at least 600 MW of solar power capacity as soon as possible.

According to Lusaka Times, projects will involve Zambian participation in their ownership structures and are expected to follow IFC’s Scaling Solar initiative, a World Bank Group program designed to rapidly expand private investment in utility-scale PV power in Sub-Saharan Africa.

Zambia’s existing electricity production is quite green; the vast majority of generation being from hydro sources. However, a lack of rainfall is creating supply issues.

The nation’s power-generation capacity is an estimated 2,310 megawatts, with the mining industry consuming about half Zambia’s electricity production. The lack of rainfall over the last year has resulted in a national power generation deficit of about 560 MW.

Even in good times, access to electricity in the country confined to just 22%  of the nation’s population of 13 million. The contrast between access in city vs. country locations is stark – 45% in urban and just 3% in rural areas.

For Zambia, solar is a slam-dunk on all accounts – and there’s certainly no shortage of sunlight.

According to the USA’s National Renewable Energy Laboratory (NREL), the country’s solar electricity generation potential is 2,425,883,281 megawatt hours per year -nearly 2,426 terawatt hours. As a comparison, electricity supply to Australia’s entire National Electricity Market (NEM) – a larger population base with  nearly 100% access to electricity – in 2014/15 was just 193.6 terawatt hours.

Solar has already made its presence felt in Zambia, particularly in micro off grid systems in the north of the country. Several remote Zambian villages were installing small solar power systems 11 years ago; long before solar caught on in developed nations such as Australia.