At first glance, for Australia’s sunshine capital, the term “Gold Coast solar power“, seems to be a no-brainer.

According to the Photovoltaic Institute, Australia has the world-leading uptake of household PV systems. Over 20% of houses host one of Australia’s 1.6 million PV systems.

One of the areas of highest uptake is Queensland. In fact, Queensland has seven of the top 10 Australian postcodes for small-scale solar installations:

The Gold Coast is situated in the south east corner of Queensland. The region stretches along 57 kilometres of beautiful coastline with some of the world’s best beaches. It is home to around 700,000 people. Gold Coast is the sixth largest city in Australia. This district includes well beyond both the City of Gold Coast into the Tweed Coast of NSW.

The suburb of Surfers Paradise is the centre of the Gold Coast’s tourism industry, which attracts close to 12 million visitors annually. According to the PV Institute, 31.8% of dwellings in the Gold Coast local government area have small scale solar installations as of Sept 2017. This adds up to a generating capacity of over 182MW.

Labrador, Broadbeach and Southport occupy the northern part of the Gold Coast strip. Further south are Palm Beach, Currumbin and Coolangatta. Just over the border are the Tweed Coast towns of Tweed Heads, Kingscliff and others.

All these suburbs and towns are beginning to exploit abundant sunshine and rooftops to make electricity from the sun via solar panels. 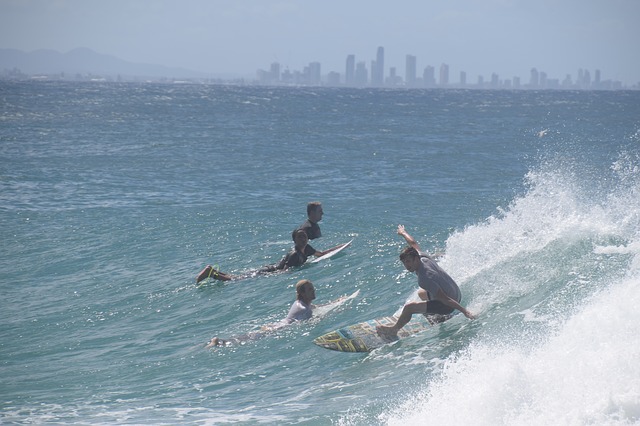 According to PV Institute data, approximately 31.8% of eligible dwellings in the Gold Coast local government area have solar panels installed.  The following Australian Photovoltaic Institute (APVI) map indicates the percentage of households with rooftop solar power systems in the region as at July, 2017 by postcode. The Tweed Coast in NSW is neck and neck with its Queensland neighbour with 31.3% with solar panels. 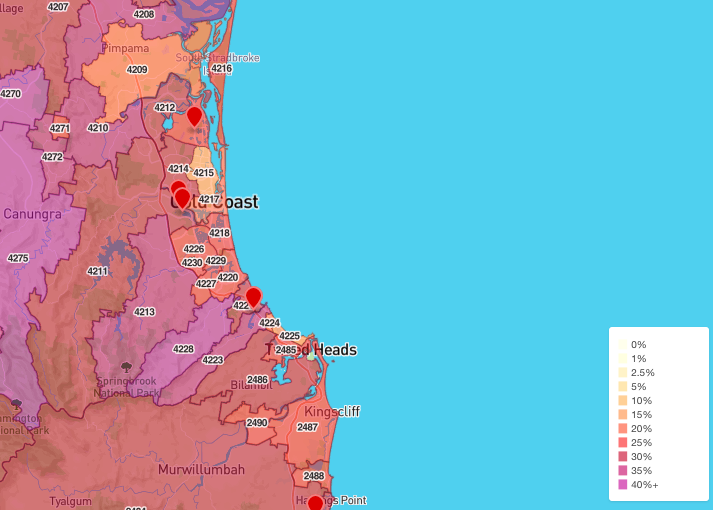 The uptake of solar panels in Gold Coast in recent years has accelerated. The popularity of PV (photovoltaics) in Queensland’s second largest city is largely due to:

The City of Gold Coast has shown some leadership in embracing clean solar energy as an alternative to not so clean sources of power.

The Gold Coast City Council has created solar initiatives in the area including:

A 5.2kW solar power system installed in Gold Coast, as in other parts of Queensland can return a financial benefit of up to approximately $2,000 a year. However it’s important to note financial gains, if any, will vary depending on the installation circumstances and the way power is consumed by a household.

By also adding battery energy storage, households in Gold Coast can reduce their mains grid electricity consumption by up to 80% and make the most of their rooftop-generated energy. As with the financial benefits of installing solar panels without storage this figure will vary according to circumstances. You can get a rough idea of the impact energy storage can have using our solar + battery calculator. Tesla, Sonnen and Enphase are highly regarded solar battery manufacturers.

The following is an example of an estimate involving a Surfers Paradise household consuming 16kWh of electricity a day. Bear in mind the above applies: this is just an approximation and your own situation will likely vary. This is for a 5kW solar panel installation, with a Sonnen 4kWh battery. 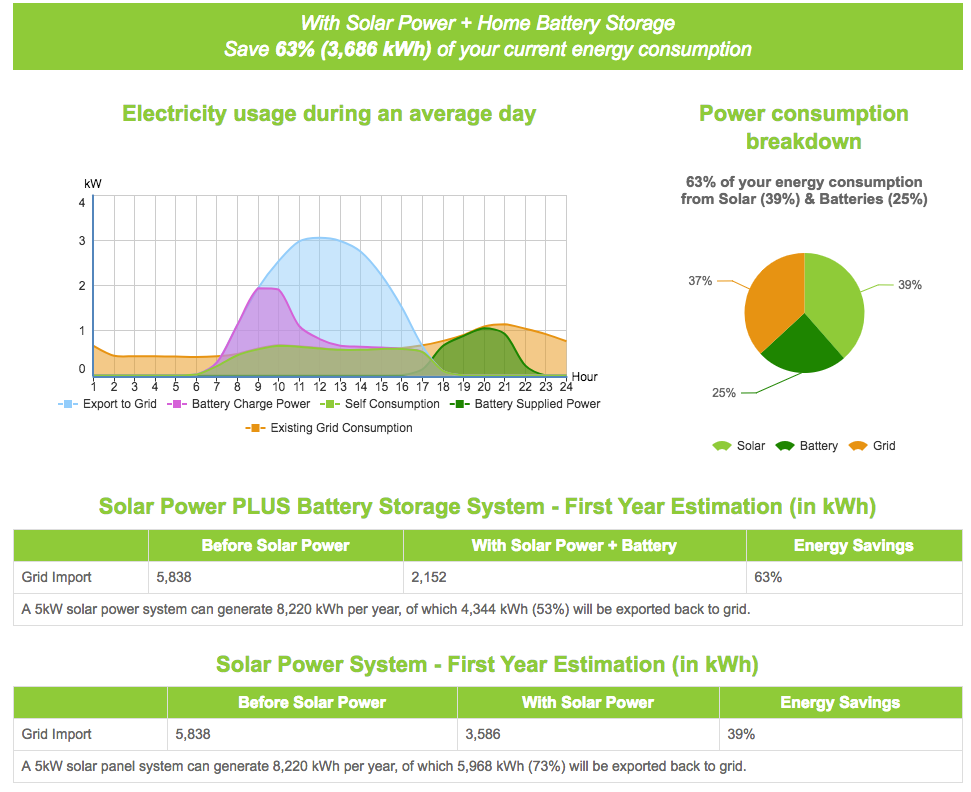 With an 8kWh battery example, we could demonstrate close to 80% energy independence.

Subsidies for the installation of solar panels in Gold Coast and its suburbs are the same as throughout Australia. The major subsidy is the Solar Credits scheme, which is based on certificates (STCs). STCs are used in most cases to gain a point of sale discount that can be thousands of dollars, depending on the size of the PV system.

On average, the Gold Coast’s Central Business District (the closest thing to being a CBD is Surfers Paradise) receives solar irradiation levels of around 4.81 kilowatt hours per square metre daily. That makes it an ideal area for installing PV modules – and it’s a similar story throughout much of the metropolitan area.

These figures are according to Energy Matters, based on historical weather and climate data based on the BOM weather station closest to the chosen location.

Ideally, solar panels installed in Gold Coast should face a northerly direction, but east/west splits are becoming more commonplace. An acceptable panel angle range is 13° to 23° and the optimal angle is 18°. On typical rooftop PV installations, actual installation angle will be determined by roof inclination.

As mentioned above, Gold Coast receives solar irradiation levels of around 4.81 kilowatt hours per square metre daily on the average. The following is estimated daily output, averaged over a year (optimal configuration) for Burleigh Heads.

Note that solar panels are not 100% efficient, hence the different output compared to the sun’s input.

The best month for electricity generation from solar panels in Gold Coast is December.

Statistics And Performance In Specific Gold Coast Suburbs and Towns

If you’re curious about how many solar panel systems are installed in specific Gold Coast suburbs and towns, and how they perform, here’s a selection of links for those suburbs.

Energy Matters has a series of location pages, if you need to find your locality, then just use the solar location page for other suburbs in Gold Coast, you can run a search here.

As well as in Gold Coast and across its suburbs, the good news is solar power performs well across the Gold Coast hinterland, Tweed Coast and Southeast Queensland – check out performance statistics for other regional areas:

Check your electricity bill for your current feed-in tariff, and the rates you are paying for grid-supplied power from your retailer.

Estimated Gold Coast electricity bill savings range noted above based on October 2017 rates of 24.0c per kilowatt hour electricity price and 7c feed in tariff with 80% to 100% consumption of produced electricity. Tariffs vary from time to time so always check with your retailer.

Wherever you are in Gold Coast or the Tweed Coast region, we can help you go solar and slash your electricity bills. If you’re also interested in boosting your energy independence with a battery system, we can assist there too. Energy Matters is an award-winning company that has been installing solar panels and battery storage across the country for over a decade.

Contact our friendly experts by using our quick solar quote page.  For Queenslanders, see our Queensland specials page. If you’re in the NSW side of the Gold Coast metro area, then check out our specials on solar panels in NSW.