It has been described as a “skeleton policy” because of its lack of detail, but the National Energy Guarantee (NEG) is the only energy policy solution on offer from the Turnbull Government in a period where people are concerned about a) carbon emissions; and b) electricity costs.

The NEG is to succeed the Renewable Energy Target (RET) program, which has been boosting solar uptake for 17 years. Although still in embryonic form, it’s clear the proposed NEG will not include the RET’s system of what amounts to a rebate on renewable energy installations for households and businesses. That system of small-scale technology certificates (STCs) based on the capacity and location of a new solar installation will cease in 2020. 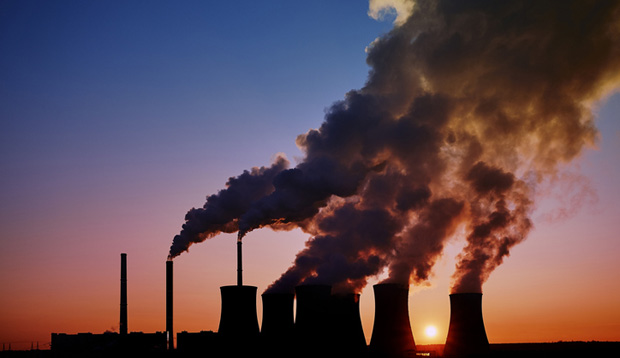 As the sun sets on the CET, the National Energy Guarantee means coal fired power stations are back on the government’s agenda. Image: Pixabay

In August 2017, the Federal Government created the Energy Security Board (ESB). The ESB’s job is to come up with a policy successor to the RET. This was in line with recommendations from the Finkel Report, produced by Chief Scientist Alan Finkel in June 2017. The report made a number of recommendations to ensure Australia kept on track with its emissions targets.

Its argument is that Australia needs “baseload power” – the kind of constant output from gas and coal-fired power stations that has traditionally provided electricity. Those who support this view see renewables as a pie in the sky solution, okay for homes, but not up to the serious business of powering industry. This seems to fly in the face of developments such as the Sun Metals zinc refinery in Townsville building its own solar array to cut its power costs, and numerous other initiatives driven by the industrial and agricultural sectors.

The government also emphasises “dispatchable electricity”; that is, electricity that can be generated and dispatched to consumers on demand at any time of the day or night. The argument is that solar and wind is not dispatchable, and therefore unreliable. This is despite proof that battery and hydro systems can store solar and wind power and release  it on demand. The Tesla mega battery in South Australia does exactly that. In fact, sufficiently developed battery technologies could store a large amount of dispatchable power from clean sources.

Tasked with providing detail on the National Energy Guarantee, the ESB issued a call for stakeholder consultation, which closed March 8. The ESB will now provide a draft, high-level design paper to COAG energy ministers in mid-April.

Following that, the ESB will, in consultation with industry, develop the details of the NEG. They will then present a final design to the COAG Energy Council. Once Council approves the final design in mid-2018, the NEG blueprint opens for consultation in the second half of the year.

2 – Retailers responsible for emissions and reliability

In its consultation guide, the ESB says the NEG should ensure:

The government will set the emissions targets that frame the NEG to comply with Australia’s international emissions commitment. 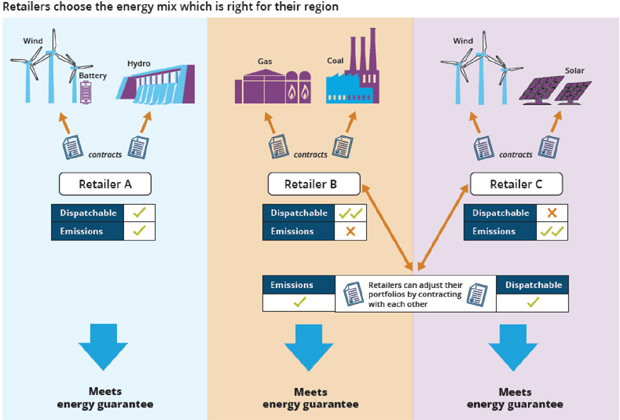 A diagram showing how retailers could operate within the proposed NEG.

But the responsibility for maintaining low emissions will now belong to the “Customer” as opposed to the generator.

The National Energy Guarantee defines “Customer” as companies that purchase electricity from power plants, mainly electricity retailers. Each Customer will have to meet an average emissions intensity for MWh in the compliance year.

How they will do this is one of the key questions for consultation. Naturally, one way is for retailers to meet their emissions requirements is to source energy from wind or solar generation. Or they may choose to invest in large-scale batteries, such as the Tesla battery in South Australia.

A group representing the CEOs of ten smaller power retailers are on record regarding the NEG. They describe the NEG’s proposal to put reliability and emissions obligations on retailers as “perverse”. Instead, the government should set national targets that encourage investors to build low emission generators.

“To hold retailers responsible for generator reliability, emissions and investment is a misplaced risk that poses a range of market implications,” the chief executives wrote to the ESB.

Are subsidies for renewables no longer necessary?

The government is also saying that subsidies for renewables are no longer necessary because the industry is thriving. This overlooks the extent to which the RET is responsible for the solar industry’s growth.

‘Reliability’ is a keyword for the National Energy Guarantee. The ESB proposes that the Australian Energy Market Operator (AEMO) will foresee shortfalls in the National Electricity Grid. It will then advise retailers, who will move to fill those gaps. This links reliability and emissions for the first time. Retailers would be responsible for both.

And according to the Grattan Institute, that’s not such a bad thing. It told the ESB consultation: “The emissions requirement of the guarantee is neither pro-coal nor anti-renewables. Any weakness in the target arises from the political choice of the Commonwealth government. The design of the guarantee is flexible to alternative choices.”

Facing an important choice on energy

The fact is that Australia has a lot of coal and gas. It could potentially go on using it, and polluting the atmosphere, for another couple of centuries. The problem with that scenarios is Australians don’t want it.

Having seen the efficacy of solar on their own rooftops, they find it hard to believe that with a little government incentive the same thing cannot be achieved on a giant scale for our national electricity grid. But without a clear target on emissions or an incentive for investment in cleaner power generation, it’s unlikely the NEG will please anybody.