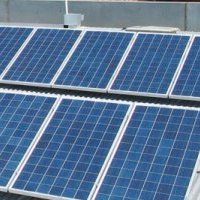 “We can do this. We have shown it’s possible – now we have one small step left,” he said. “Canberra can and should be a beacon for everyone who realises the world must act decisively now to stave off a future of catastrophic climate change.”

The Chief Minister reportedly also stated renewable energy jobs had grown 400% in the ACT in the past five years and the new target would create even more related employment.

Environment Minister Simon Corbell said the ACT was on track to reaching the 2020 90% goal and that the Territory will achieve 60 per cent by 2017 and 80 per cent by 2018. With regard to solar under the 90% target, 91MW of solar generation capacity will be installed; including projects under the previous large-scale Solar Auction and next generation solar technologies.

“This is about seizing economic opportunity and recognising the enormous global market in renewables and wanting to attract some of that investment and some of that jobs growth to our city,” Mr Corbell said of the new 100% target.

In other related news, Minister Corbell announced late last week Hornsdale Wind Farm has reached financial close. The wind farm will be located 90km south-east of Port Augusta in South Australia and will supply 100 megawatts of wind energy to Canberra.

“The first ACT wind auction today celebrates a milestone, as all three successful wind farms are now moving into construction phase,” Minister Corbell said. The other two wind farm projects that were winners in the ACT’s first wind auction were Ararat Wind Farm and Coonooer Bridge Wind Farm; both in Victoria.

On-site construction works of Hornsdale Wind Farm are due to start in January 2016 and it’s expected it will be completed in April 2017.