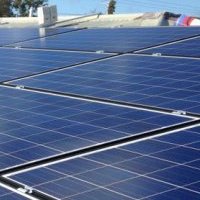 ACT Minister for the Environment Simon Corbell yesterday announced the launch of a process that will add 50MW extra solar capacity to supply Canberra.

The initiative focuses on the commercial development of solar-related technologies that address issues of reliability and intermittency – including the integration of energy storage.

“Cost-effective storage of renewable energy will be a game-changer for the energy industry, and would allow us to keep, for example, energy generated by solar during the day for use at peak times during the evening,” Mr Corbell said.

While proposed sites can be located in or around the ACT, anywhere within the National Electricity Market (Queensland, New South Wales, Victoria, South Australia and Tasmania) will also be considered.

The energy storage aspect of a project could be in one of many forms.

“There are many options for storage of renewable energy, including battery and thermal storage, and pump and store hydro, and includes fixed storage devices at homes or businesses across the territory,” Minister Corbell said.

The announcement follows another last week regarding the ACT’s Renewable Energy Industry Development Strategy, which seeks to enhance collaboration on renewable energy between industry and research sectors. It also aims to deliver long-term benefits to local businesses through the inclusion of regional contractors and labour force.

The ACT has set a target of achieving 90% renewable energy by 2020 – and is well on its way to meeting that goal.

According to data from the Clean Energy Regulator, there are approximately 15,634 residential solar power systems in the ACT and 9,031 solar hot water systems and heat pumps.

Expressions of Interest for the Next Generation Solar initiative are invited until 3pm, 17 June 2015.