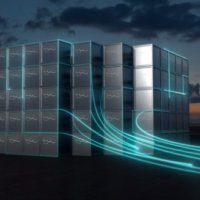 Audi is entering the pure-play EV arena and has set its sights on reusing its electric vehicle batteries.

When an EV battery reaches the end of its serviceable life for that application, there’s still plenty of storage capacity left that could be used for other purposes.

“As a manufacturer of these batteries, it is our responsibility and also an opportunity to ensure these energy storage systems have a second life,” says Audi.

Through a platform developed in-house, Audi says it will be possible in future to bring together all VW Group high voltage batteries to create a new power storage system for renewable energies.

“Audi expects to use these containers in unison with fast charging stations to operate at up to 250kW and enable drivers to pull up and charge their vehicles,” says CarAdvice. “During other times, the system can act as a buffer for renewable energy providers such as wind and solar power.”

Audi has set up a test site near its Ingolstadt headquarters to put a 20kW photovoltaic solar array with four traction batteries through its paces.

The VW group of companies aren’t exactly experiencing salad days at the moment, but it’s good to see forward movement on this sort of concept while it addresses its other issues.

In other EV-related news from Audi, the company has announced it will provide a DC fast-charging network for buyers of its first-ever battery electric vehicle, the Audi e-tron Quattro SUV, which will arrive in the USA in 2018. Said to be powered by a 95-kilowatt-hour battery pack, the e-tron Quattro could be recharged by chargers on the network to 80 percent capacity in less than 30 minutes.

While pure-play EV’s are new to Audi, the company has been dabbling in and selling hybrids for quite some time, starting with a hybrid concept car in 1989 called the Audi Duo.

Audi predicts up to 25% of its sales over the next ten years will involve vehicles having some sort of plug.