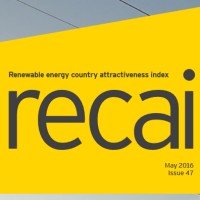 Australia has managed to edge back into the top 10 list of the world’s best countries to invest in renewable energy says professional services firm Ernst & Young (EY).

Renewable energy deals made up half the transaction volume in the global power and utilities market during 2015, generating US$68 billion. The RECAI rankings place the USA, China and India in the top three positions.

The report states Australia’s Renewable Energy Target is responsible for the rise in activity from the renewable sector but notes that much of this activity is coming from short term state-level tenders and pre-sale off-take agreements, which do not necessarily translate to long term power purchase agreements (PPAs) for renewable energy projects.

This mismatch between the 3-5 year PPAs on offer and the conventional 15-20 year agreements that developers consider bankable in other parts of the world is holding back a potential “mountain of global cash” for Australia, according to EY Oceania Power & Utilities Leader Matt Rennie.

“It is difficult to comprehend the sheer volume of global pension fund money that needs to be invested in energy infrastructure, and particularly non-conventional energy,” says Rennie.

“The market is extremely competitive because of pressure to deploy capital and limited opportunities globally. We’ve seen this in the results of renewable energy tenders in Mexico, India and Dubai over the past few months, with prices of between US$29/MWh and US$40/MWh respectively for solar projects, and rising multiples for renewable assets globally.”

But the report notes there are promising signs of an emerging Australian corporate PPA market, similar to established models in Europe and the USA.

State governments are increasingly taking the initiative away from Canberra and forging their own renewable-based economies according to Mr. Rennie, but support for investors needs to entrenched in policy.

“The race to meet the current RET is now driving deals, but ultimately longer-term policy certainty will be required to drive long-term growth in the renewable energy in Australia, and that is what the sector will be looking for following the upcoming Federal election, regardless of who is in power,” states Mr. Rennie

The report notes the sector is now left with around 5GW to 6GW of renewables to build to meet the 33TWh RET by 2020; a challenge that Australia’s Clean Energy Regulator recently stated could be met.