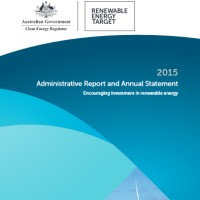 8.9 million megawatt hours of electricity was generated or displaced by small scale renewable sources such as rooftop solar power systems in Australia during 2015.

According to a recent report from the nation’s Clean Energy Regulator, 188, 902 small scale systems were installed last year. While this was lower than 2014, average small-scale solar panel system capacity increased to 4.9 kilowatts from 4.4 kilowatts in 2014. This is almost double the average system capacity compared to 2011.

In 2015, just 472 of around 130 000 on-grid solar panel systems reported a concurrent battery installation. That figure will be significantly higher after this year as uptake of the next generation of home energy storage systems such as Tesla Powerwall and Fronius Solar Battery really starts to kick in.

The report states the uptake of commercial solar power systems, and their size, is also expected to grow in the future.

With regard to large scale projects, 15.2 million megawatt hours of clean electricity was generated by large scale renewables in 2015 – enough to power around 2.4 million average Australian households over the period of a year.

There has been some doubt recently as to whether Australia could reach its 2020 Renewable Energy Target after a sustained anti-renewables campaign by the previous Abbott government, which saw investment in large scale projects dry up.

“Our overall finding is that progress in 2015 was adequate under the circumstances and the Large-scale Renewable Energy Target in 2020 is achievable,” says the report.

” We estimate an additional 6 000 megawatts of installed capacity is required to meet the total cumulative demand for large-scale generation certificates through to 2020.”

The report states the total capacity of committed new build during this year will need to be around 3, 000 megawatts for ” satisfactory progress” towards the 2020 target.

The Regulator estimates 9,000 megawatts of large-scale renewables projects already has development approval; more than enough to meet Australia’s 2020 target if all of it is constructed.