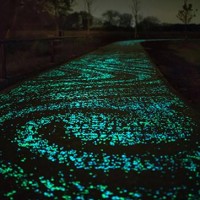 Here’s a different type of solar road idea. A new light-emitting cement “charged” by the power of the sun could light up roads at night, all night and for many, many years – no batteries or solar cells required.

While glow-in-the-dark materials certainly aren’t new; they are mostly made with plastic and degrade in just a few years through the action of the sun’s ultra-violet rays.

Dr. José Carlos Rubio, from Michoacan’s University of San Nicolas of Hidalgo in Mexico, has created a light-emitting cement that he claims has a  life of a hundred years.

“Nine years ago, when I started the project, I realized there was nothing similar worldwide, and so I started to work on it. The main issue was that cement is an opaque body that doesn’t allow the pass (sic) of light to its interior”, said Dr. Rubio.

His research focused on modifying the micro-structure of cement in order to eliminate the crystals that make it opaque; eventually developing a translucent gel enabling the absorption of solar energy returning as light after dark.

The product could also be used in plaster, creating quite a stunning effect – no more night lights required.

The light-emitting cement is either a blue or green color. The makers fine-tune its intensity is  to suit the application, whether it’s interior lighting or road markings. It’s not dependent on direct sunlight and can “recharge” sufficiently even during overcast days.

Dr. Rubio says the creation of the light-emitting cement has inspired others.

“Due to this patent (the first one for this university), others have surfaced worldwide. In the UK, we received recognition from the Newton fund, given by the Royal Engineering Academy of London, which chooses global success cases in technology and entrepreneurship”.”

It appears the cement gel without the fluorescent attributes added can also inhibit growth, reproduction and transfer of yeast and fungi; making it ideal for applications in hospitals, restaurants or the food processing industry.

Michoacan University of Saint Nicholas of Hidalgo (UMSNH) is the oldest institution of higher education in the Americas; with roots tracing back to 1540.

1,000 Kilometres Of Solar Roads For France
Is The Solar Road Concept Viable?