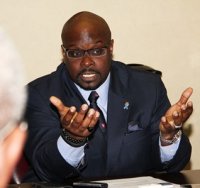 The Government of the the Bahamas has announced it will be developing more than 20 MW of solar power generation across its outer islands, also known as the Family Islands.

A Memorandum of Understanding was also signed between CWR and the Government with view to speeding up the nation’s shift towards renewable energy production and energy efficiency.

“You would see that a concentrated focus on some of our southern islands has been factored in to ensure that we do not find ourselves focusing on our populated and more developed islands,” said Minister of Housing and the Environment the Hon. Kenred Dorsett.

The Bahamas signed on to the project as a participant in  CWR’s Ten Island Challenge (PDF), a project backed by Virgin Group founder, Sir Richard Branson.

The Challenge has a goal of accelerating the transition of Caribbean island economies from heavy dependence on fossil fuels. It helps islands identify specific renewable energy goals, assists in building capacity and develops an enabling environment for project financing across the region.

CWR has a vision of  “a world where over $1 trillion invested in climate change solutions is an annual occurrence, not a historic milestone.”

Electricity in the nation is primarily generated by the Bahamas Electricity Corporation – (BEC);  a government corporation that provides electricity to all of the  Islands, with the exception of Grand Bahama. The corporation operates power plants at 25 locations, with a collective peak capacity of 438 MW. Most of these facilities use diesel generators.

The Bahamas’ solar efforts will also strike a blow in the battle against climate change and the sea level rise that could come with it, which poses a significant threat to the nation’s survival.

According to International Policy Digest, around 80 percent of the land in The Bahamas lies less than 1 meter above sea level. A 1 meter sea level rise would destroy a significant amount of country’s infrastructure and saltwater intrusion would contaminate freshwater aquifers. More intense storm activity will also create increased problems associated with erosion.