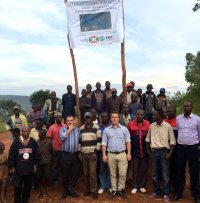 Project developer Gigawatt Global has announced the signing of two international grants to build a 7.5 MW solar field in Burundi, a nation where just four per cent of people have access to electricity.

The agreement secures nearly one million dollars in funds from the U.S. Trade and Development Agency’s (USTDA) Power Africa Initiative and the Energy and Environment Partnership (EEP), a coalition representing the British, Finnish, and Austrian governments. The grants will provide vital finance allowing Gigawatt Global to conduct key feasibility studies into the environmental and social impacts of the $20 million solar project.

With funding in place, Gigawatt Global plans to build the solar field on 37 acres of land in the Burundi’s Gitega region, about 100km from the capital of Bujumbura. The tiny nation has a total of only 52 MW of installed energy capacity and currently experiences rolling blackouts with an average electricity downtime of two days per week. Upon completion, the solar panels will provide electricity for up to 60,000 homes and increase the country’s generation capacity by 15 per cent.

The company has committed to work closely with the Polytechnic University of Gitega and the local Burundi community on creating ongoing employment and education programs in the field of solar power.

“Our impact investment model is to strengthen developing nations, both economically and environmentally, by providing renewable energy sources where they are most needed,” said Yosef Abramowitz, President of Gigawatt Global. “We plan to build 1,000 solar megawatts in Africa by 2020, thereby providing electricity to millions of households and institutions that are currently without the most basic of human needs.”

The announcement comes a month after the successful launch by Gigawatt Global of East Africa’s largest utility-scale solar field, an 8.5 MW installation at the Agahozo-Shalom Youth Village, which boosted Rwanda’s energy capacity by nearly eight per cent.