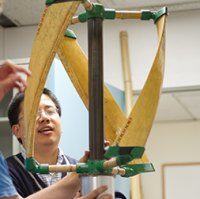 Inspired by bamboo’s adaptation to wind, University of Vermont engineers are using it to development a low cost micro-wind turbine.

Described as ‘vegetable steel’, bamboo has a tensile strength similar to steel – but without the weight and is grown rather than mined. Tensile strength measures the force required to pull a material to the point where it breaks.

UVM professor of engineering Ting Tan and his team have created a hybrid energy harvester combining a small-scale vertical axis wind turbine made from bamboo with a solar panel.

“We capture the wind and the sun at the same time, just like the bamboo does,” says Professor Tan.

Designed as a standalone, small-scale system that incorporates a deep cycle battery, the energy harvester has been primarily developed for developing nations with electricity accessibility issues. It can generate enough power to run LED lights and charge small handheld devices such as mobile phones.

With the turbines blades and supports made from bamboo, these components could be grown from local sources. With the basic materials readily available, it makes parts of the system comparatively easy to repair and maintain.

The energy harvester contains a micro-controller that determines the better power source to be charging the battery at any given point of time..

The device has already been tested earlier this year and the team have applied for a preliminary patent. Next year will see a more rigorous testing phase begin in a wind tunnel operated by SOH Wind Engineering.

“I see the need for a power system that is convenient, that is sustainable and that is beautiful,” says Professor Tan. “We are not building wind turbines; we are planting wind turbines.”

Trivia – Bamboo is the fastest growing woody plant in the world, with some species attaining growth rates of 10cm a day.