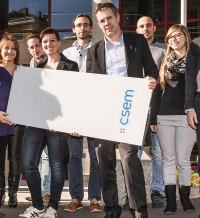 The headline is a ‘revolution in renewable energy architecture’. What it means is the world’s first white solar panels with no visible cells or connections.

The Swiss company behind the technology, CSEM, claim that today’s blue/black silicon solar panels don’t blend well with modern building design. They have developed a range of totally opaque coloured solar modules – including white – for use in building integrated photovoltaic (BIPV) systems.

“For decades architects have been asking for a way to customize the colour of solar elements to make them blend into a building’s skin. White is a particularly interesting colour as it is widely used for its elegance, versatility, and fresh look,” a company statement reads.

“Despite this demand, no one was ever able to realize a truly white solar module; naturally believing that it was impossible as most of the light is reflected, contrary to the requirements of all solar panels.”

White solar panels may seem counterintuitive as true black is able to absorb all visible light as well as infrared light. The Swiss product uses standard silicon solar cells combined with a special filter that scatters light from the entire visible spectrum while absorbing just infrared light. This is the wavelength most silicon solar panels use to transform into electricity.

Its reflective surface allows the white solar panel to operate at temperatures 20-30° lower than normal PV modules. According to CSEM, their white and coloured solar filters can be applied to existing systems or integrated into new customised panels during assembly, on flat or curved surfaces. They expect the building industry, along with manufacturers of cars and electronic devices, to show immediate interest.

“Any solar technology based on crystalline silicon can now be used to manufacture white -and coloured – modules,” said Professor Christophe Bellif, Vice-President Photovoltaics at CSEM.

“White PV modules can also contribute to increase energy savings in buildings by keeping inner spaces cooler and reducing air conditioning costs. Several US cities have started to paint roofs white for the same reason. In a near future such actions could be replaced by the installation of white solar modules.”

While it’s certainly an interesting concept, there is data that the filter skin does impact on output performance.