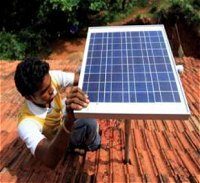 Bangladesh Prime Minister Sheikh Hasina has announced a plan to provide 3 million more rural families in the nation with small solar power systems over the next three years.

The initiative will build on the success of the DCOL SHS Program that has already seen  three million small solar home systems installed.

38 percent of people in Bangladesh still have no access to electricity; often relying on expensive and polluting fossil fuels for light.

The solar home systems installed under the DCOL SHS Program are small (average 39 watts) and consist of a solar panel, a battery and a charge controller – but even a small amount of reliable power can make a huge difference in people’s lives.

In addition to providing clean power to families, the program has resulted in employment for approximately 30,000 people.

According to Bangladesh’s Ministry of Power, Energy and Mineral Resources, up until relatively recently approximately 89% of the nation’s power came from natural gas and the rest source from liquid fuel, coal and hydropower. The nation’s renewable energy capacity is now approximately 403 MW, with 150MW attributable to small solar systems installed under the DCOL SHS Program.

Among other Bangladesh government clean power initiatives is a plan to replace all diesel powered irrigation pumps to solar units within 5 years. The Bangladesh Power Development Board is also in the process of developing solar farms, with five locations identified where a total 143 MW capacity can be developed.