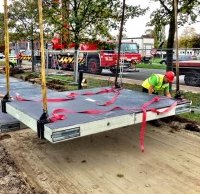 While it’s not particularly long,  the world’s first solar roadway is now in use in Krommenie, The Netherlands.

The 70 metre stretch of bicycle path is comprised of SolaRoad – prefabricated concrete modules 2.5 by 3.5 metres featuring a translucent top layer of tempered glass around 1 cm thick with standard silicon solar cells beneath.

An additional 30 metres of SolaRoad is to be installed and the project will then be continuously monitored. Data gathered will be used to refine the SolaRoad product.

It’s expected the 100 metre installation will generate as much electricity as is used by 2-3 average households. Electricity generated will be exported to the mains grid.

That level of output is far less than what could be achieved with equivalent rooftop solar panels or traditional solar farms and the SolaRoad product appears to be rather pricey – so why bother?

The organisation behind the SolaRoad concept, TNO, points out if all suitable roofs in the Netherlands had solar panels, they could only supply approximately 25% of the Dutch electricity demand.

” The approximately 140,000 km of roads in the Netherlands cover a total area of about 400-500 km2, which is significantly larger than the total (suitable) roof surface area,” says TNO. ” With the integration of solar cells in road infrastructure, a great potential has come into existence, creating a complementary market for solar panels.”

TNO says a return on investment is feasible within a life span of 20 years and is aiming for a payback period of 15 years or less.

SolaRoad is being developed in partnership with the Province of Noord-Holland, Imtech and Ooms Civiel. The Krommenie installation will be officially opened on November 12th 2014.