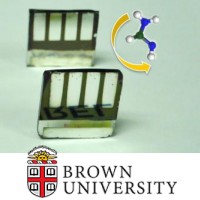 While perovskite solar cells can offer an efficiency similar to silicon at a lower cost, they have less thermal stability. Brown University-led research may have addressed this challenge.

A converted form of perovskite, called formamidinium lead triiodide (FAPbI3), has better thermal stability and light absorption attributes. It’s been around for a while; but up until now has been quite difficult to manufacture.

Researchers from the USA’s Brown University, the National Renewable Energy Laboratory (NREL) and the Chinese Academy of Sciences’ Qingdao Institute of Bioenergy and Bioprocess Technology have found an easier way.

They took a conventional perovskite thin film – based on methylammonium lead triiodide (MAPbI3) – and exposed it to formamidine gas at a temperature of 150 degrees Celsius. This converted the MAPbI3 to FAPbI3 while preserving microstructure and morphology of the original thin film.

“It’s like flipping a switch,” said Professor Nitin Padture. “The gas pulls out the methylammonium from the crystal structure and stuffs in the formamidinium, and it does so without changing the morphology. We’re taking advantage of a lot of experience in making excellent quality MAPbI3 thin films and simply converting them to FAPbI3 thin films while maintaining that excellent quality.”

Laboratory scale perovskite solar cells made using the method demonstrate an efficiency of around 18 percent.

“The technique is simple and has the potential to be scaled up, which overcomes a real bottleneck in perovskite research at the moment,” said Professor Padture.

Work will continue to further improve the efficiency of the FAPbI3 films.

The teams’ research to date has been published in the Journal of the American Chemical Society.

Besides the low cost aspect, some of the other advantages perovskite solar cells have over their silicon counterparts include the potential to form the basis of spray-on or paint-on solar products. There’s also the possibility of making them transparent, suitable for use in solar window applications.

Perovskite is also currently being tested in hybrid cells. Earlier this month, researchers at Hong Kong Polytechnic University (PolyU) stated they had created a perovskite/silicon hybrid solar cell with an efficiency of 25.5 percent – a new record.