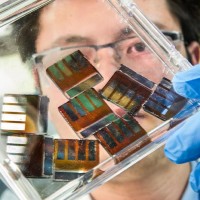 Perovskite solar cell (PSC) technology offers big advantages as a cheap, high-efficiency alternative to silicon-based photovoltaic cells, but producing them in the laboratory can be a bit of a hit-and-miss affair.

Perovskite cell efficiencies have jumped from an initial 3.8 percent in 2009 to a record 25.5 percent, demonstrated by a team from Hong Kong Polytechnic University with a hybrid silicon-perovskite cell earlier this year. However, depending on the lab manufacturing the material, the efficiency of these cells tends to hover around the 16 percent mark.

The problem lies in the way perovskite films are grown. A precursor chemical solution is used to form perovskite nanocrystals upon a substrate, which in turn is exposed to a substance that removes the precursor solvent.

The timing of the process is an art – if the anti-solvent isn’t added at exactly the right moment, size defects and pinholes can form in the nanocrystal structure of the perovskite film, detracting from the efficiency of the overall cell.

The NREL team used a process called Ostwald ripening, which involves treating low-quality perovskite films containing small crystals and pinholes with a specific solution of methyl ammonium bromide (MABr). This dissolves small and non-uniform crystals and deposit them onto larger ones, boosting the stability and efficiency of the perovskite film.

The Ostwald technique enabled the team to obtain a sunlight to energy conversion efficiency of 19.12 percent, compared to a significantly lower efficiency level of 14–16 percent for the PSC films without this MABr treatment.

“With the Ostwald ripening process, different-sized nanocrystals formed with different film qualities could then grow into pinhole-free perovskite films with similar large crystal sizes,” the researchers noted in a paper recently published in the journal Nature Communications.

The research, was funded by the U.S. Department of Energy’s SunShot Initiative, which funds universities, private companies and national labs to drive down the price of solar power to below USD $0.06 cents/per kilowatt hour.