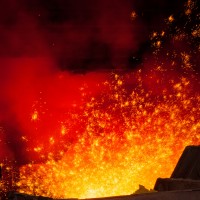 Solar powered iron ore smelting could be step closer thanks to the efforts of researchers at Australia’s Swinburne University.

The temperatures needed to produce iron from iron ore need to reach between 1,000 and 1,500 degrees Celsius.  That requires an enormous amount of energy. According to Low-Tech Magazine, it takes 20-25 megajoules (5,550 to 6,950 watt-hours) to produce one kilogram of iron from its ore.

Aside from the expense involved, there’s the carbon emissions associated with the energy required.

The process requires up to 450 kilograms of carbon for every tonne of ore processed; with as much has half of that carbon needed provide energy for the reaction. The 450kg of carbon consumed results in approximately two tonnes of CO2 emissions.

Dr. Ekman says 2,000–3,000 of these mirrors precisely positioned over 70,000 square metres would be sufficient for a 10 megawatt solar powered reactor.

Their plan is to use a hybrid power system; enabling the use of conventional power when needed and allowing for 24/7 iron ore processing.

The pair say their concept could slash the carbon footprint in iron production by up to 30 per cent.

In 2014, we reported students at Valparaiso University’s James S. Markiewicz Solar Energy Research Facility had constructed a furnace powered by the sun capable of reaching temperatures of over 1,650 degrees Celsius. However, that device was designed for research into chemical reactions, rather than an attempt to create a commercial product designed for processing iron ore.

In other recent renewable energy related news out of Swinburne University, the new $5 million Transport Innovation Centre was opened at Swinburne’s Malaysian campus yesterday. The focus of the Centre will be on transportation, energy storage and personal mobility.