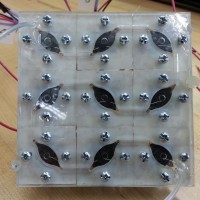 It may never appear on residential rooftops, but this bacteria powered solar panel marks an interesting advancement in novel ways of harnessing solar energy.

Researchers at Binghamton University’s Thomas J. Watson School of Engineering and Applied Science have connected nine biological-solar (bio-solar) cells into a bio-solar panel. It’s the first time this has been done and the device generates the highest level of wattage achieved with small bio-solar cells so far –  5.59 microwatts (there are 1,000,000 microwatts in a watt).

As a comparison, a conventional rooftop solar panel with 60 cells can generate up to 285 watts. A bio-solar panel with the same number of cells could generate approximately 0.00003726 watts.

Regardless of the low power production, the concept has potential and the development marks a significant improvement in bio-solar cell performance through miniaturizing innovative device architectures and the panel approach.

“Once a functional bio-solar panel becomes available, it could become a permanent power source for supplying long-term power for small, wireless telemetry systems as well as wireless sensors used at remote sites where frequent battery replacement is impractical,” according to Seokheun “Sean” Choi, an assistant professor of electrical and computer engineering and co-author of a paper on the development.

Another interesting aspect is the prospect of generating electricity 24 hours a day using bio-solar panels. The device developed by Professor Choi and his colleagues continuously generated electricity from photosynthesis and respiratory activities of the bacteria in 12-hour day-night cycles over a total of 60 hours.

Cyanobacteria are often (and somewhat incorrectly) referred to as blue-green algae and are a common sight in waterways around Australia during the summer months when massive blooms can occur. Other applications for cyanobacteria include fixing atmospheric nitrogen in soil, the creation of biofuels and medicines. Cyanobacteria can be found in almost every habitat on Earth.

The Binghamton University team’s work was reported in a paper “Biopower generation in a microfluidic bio-solar panel” published in the journal Sensors and Actuators B: Chemical.