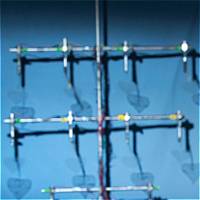 A group of Iowa State University scientists have developed a biomimetic tree that could – emphasise “could” – harness wind power to generate electricity for charging small household appliances.

The device produces energy when artificial leaves attached to a metallic trellis flutter and sway in the wind. Piezoelectric strips inside the leaf stalks generate an electrical charge as each leaf bends up and down.

The group based their design on the cottonwood tree, because of that species’ highly ordered, efficient leaf structure was the most conductive for piezo excitation.

The motion created by wind flowing among the leaves and branches of a tree induces electromagnetic waves, the researchers found, meaning in a 10 mph (17 k/pH) breeze a cottonwood tree with 500,000 leaves could dissipate 80 W of energy via leaf motion alone. 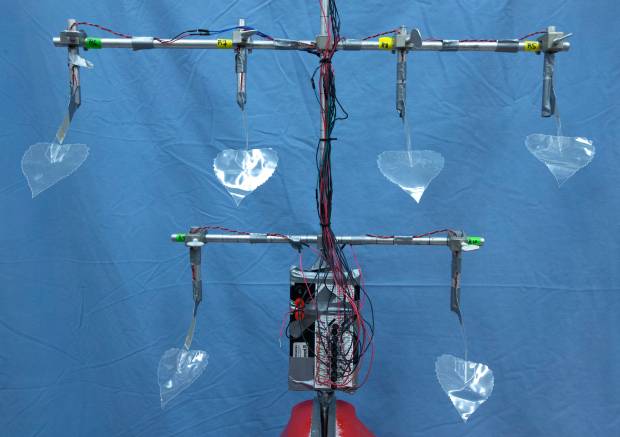 “If a faux tree scavenged half this power, it could deliver off-grid energy sufficient to charge batteries of small household appliances,” state the researchers.

The tree is based on biomimetics – mimicking natural processes with artificial means. But Michael McCloskey, an associate professor of genetics, development and cell biology at ISU, warned the prototype wouldn’t be replacing wind turbines any time soon.

“The possible advantages here are aesthetics and its smaller scale, which may allow off-grid energy harvesting,” Professor McCloskey said.

“We set out to answer the question of whether you can get useful amounts of electrical power out of something that looks like a plant. The answer is ‘possibly,’ but the idea will require further development.”

In a paper published in the academic journal PLOS ONE, the ISU team discuss how mobile phone towers and other antenna structures in urban centres are often camouflaged as trees. If these could be adapted to generate wind power, the researchers say it would increase their functionality.

Curtis Mosher, an associate scientist at Iowa State and co-author of the paper, envisions artificial trees based on the prototype with tens of thousands of leaves producing electricity for homes in urban areas where large wind turbines cannot be installed.

But first the group must find other methods of generating energy from the artificial leaves than piezoelectric power. Though it was an obvious place to begin, with materials and technology widely available, the scientists found it didn’t deliver efficiencies at a high enough level to satisfy market demands.

“It’s definitely doable, but the trick is accomplishing it without compromising efficiency,” Mosher said. “More work is necessary, but there are paths available.”

With more research, the ISU group believe triboelectricity technology, which generates charge through the friction of different materials, could provide an effective replacement for piezoelectricity, but much better efficiencies were needed before people began seeing plantations of wind harvesting trees in parks and neighbourhoods.

The team’s paper, “Wind Energy Conversion by Plant-Inspired Designs”, can be viewed here.

The ISU’s device isn’t the first vibration based wind energy harvesting device – we mentioned one back in 2010 that was being developed at Cornell University in the USA.