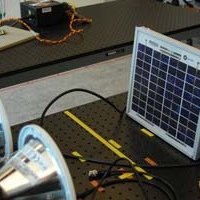 A new type of wireless data communication using solar panels to act as receivers and to create power for the technology could have a huge positive impact on millions of people around the world.

The development by the University of Edinburgh’s Li-Fi R&D Centre uses a solar panel to receive high speed Li-Fi transmitted data while also generating electrical power for the operation of the function.

Professor Harald Haas demonstrated how Li-Fi can be used with solar cells to receive data at this year’s TED Global 2015 event in London.

“The potential expansion to the internet is massive and my aspiration is that this broadband solar panel receiver technology for Li-Fi will help solve the challenges of the digital divide throughout the world, and catalyse the uptake of the IoT as connectivity and battery-free power supplies are essential if we want to connect a trillion objects to the internet,” said Professor Haas.

“IoT” refers to the Internet of Things – a network of physical objects embedded with electronics, software, sensors and network connectivity enabling these devices to collect and exchange data. The range of objects is huge; for example, a refrigerator could communicate what food items need to be purchased. Watches could be powered and connected to the internet through light.

That’s all quite exciting from an uber-geek perspective, but at a more basic level the new invention could have profound positive effects in developing countries and isolated regions. An estimated four billion people worldwide do not have access to the internet .

” The wider opportunity is to transform global communications by speeding up the process of bringing internet and other data communication functionality to remote and poorer regions in a way not previously thought achievable due to lack of infrastructure and investment,” said Tom Higgison, Edinburgh Research & Innovation (ERI) IP Projects Manager. ERI is the commercialisation arm of the University of Edinburgh.

ERI is now engaged in seeking industrial partners to work with the University’s Li-Fi R&D Centre to develop the technology for commercial rollout.