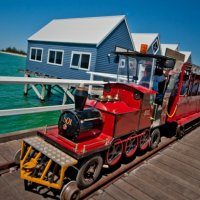 The historic petrol-powered Busselton Jetty Train will be retired later this year and replaced with a solar-powered, electric version.

The current 50-seat train has been taking visitors on a 1.7 kilometre journey over Geographe Bay since the 1970’s. It’s a major drawcard to the town that attracts 400,000 visitors from around the world every year and is the most visited built tourism attraction in Western Australia.

The new train, which will be able to seat 90 passengers and will look similar to the current locomotive, is being funded by a $200,000 grant from the Federal Government’s Tourism Demand Driver Infrastructure Programme.

According to Busselton Jetty Environment and Conservation Association chief executive Linda Shreeve, the Association is hoping to install solar panels on the roof of the train itself or on the rooftop of a new railway house to power its operations.

There will certainly be no shortage of sunlight to charge the train – Busselton receives solar irradiation levels of around 5.06 kilowatt hours per square metre daily.

Busselton Jetty is the longest wooden jetty in the southern hemisphere. Construction of the pier commenced in 1853 and was extended on a number of occasions up until the 1960’s, when it reached 1,841 metres. The last commercial ship berthed at the jetty in 1971.

During its 150 year history, the jetty has been battered by storms, fire and faced demolition a couple of times. A major restoration project in 2009 saw $27 million spent on various works. In 2014, it was added to Western Australia’s state heritage list.

There’s an array of activities and amenities at the jetty, including an underwater observatory situated close to the end of the pier. Visitors descend 8 metres to the ocean floor via a spiral staircase to view tropical and sub-tropical corals, sponges, fish and invertebrates. 300 different marine species live beneath the jetty.

For the more adventurous, Underwater Helmet Walks allow visitors to roam among the marine life below the pier. Previous diving experience and certificates are not required for the trek, which has been likened to walking on the moon.

Further information on Busselton Jetty can be viewed here.