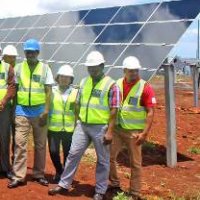 It might not be a large solar PV plant by many measures, but it’s a big moment for the people of Swaziland – and more power to them.

On Wednesday, the first stage of a grid-connected photovoltaic power generation facility situated at Buckswood House will be switched on. According to the Swazi Observer, the 100 kW capacity for this initial stage will soon be followed by a second stage of 850 kW.

A third project will really crank up the solar volume – a 21.6 MW plant; construction of which is slated to commence at the beginning of next year.

The SEC’s Sifiso Dhlamini earlier described the project as a “dream come true”.

The Buckswood 100kW Solar PV pilot project seeks to prove that solar is a viable solution to increase the country’s internal generation and reduce energy imports, plus broaden the local skills base.

The plant will be owned and operated by the Independent Power Producer (IPP), which will sell all electricity generated to SEC.

Swaziland is a small, landlocked monarchy in southern Africa with a population of around 1.25 million. Its total installed electricity generation capacity in 2012 was 69.4MW, with 60 megawatts of that being hydro – so in that regard its use of renewables as a percentage of overall generation capacity is very high.

However, wood fuel makes up around 90% of final energy consumption and biomass is a major source of electricity self-generation in various industries. The nation also imports a significant amount of electricity and oil.

The overall electrification rate of Swaziland is just 27%; 40% of urban areas and 4% of rural regions.

The country has significant solar resources to tap, with solar irradiance levels between 4 and 6 kWh/m2/day. There is also moderate potential for wind energy use.

It’s estimated Swaziland has a gross theoretical hydropower potential of 3800 GWh annually and a potential installed capacity of 200MW.