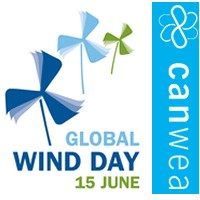 Canada has celebrated Global Wind Day by announcing it has become the 7th nation in the world to surpass 10,000 MW of installed wind power; enough to provide energy for over three million homes.

According to the Canadian Wind Energy Association (CanWEA), the milestone was achieved after the June 10 commissioning of Ontario’s 270 MW K2 Wind Farm, reported by Energy Matters last week.

More wind energy has been installed in Canada over the past five years than any other source of generation, including coal and gas. Three record years of investment growth in the sector has seen capacity increase by an average of 1,300 MW, or 24 per cent, each year. CanWEA president Robert Hornung believes 2015 is on track to break new records for new wind installations.

“Meeting the 10,000 MW milestone confirms that Canada is a global leader in wind energy development,” Hornung says. “Wind energy’s cost competitiveness, coupled with the fact that it produces no greenhouse gas emissions, means it is well positioned to continue its rapid growth as a mainstream contributor to Canada’s electricity supply.”

With wind farms providing power in every Canadian province, from Ontario to the Yukon, wind energy now contributes nearly five per cent of the country’s electricity needs, the equivalent of three million households.

CanWEA has calculated the benefit of wind power not just for the environment, but for Canada’s employment figures. It states that every 100 MW of new wind creates over 1,000 person-years of work during the construction phase of projects and 350 person-years of long-term work for operational and maintenance staff. Additionally, every megawatt of new wind added to capacity represents an investment of around $2 million.