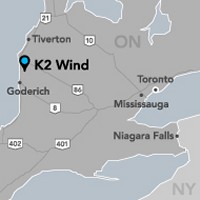 Ontario’s booming clean energy industry continues to attract big investment in solar and wind projects, with the province expected to add some 2,300 MW of new renewable power by mid-2016.

The latest commission is the 270 MW K2 Wind farm, located in the southwest-Ontario township of Ashfield-Colborne-Wawanosh (ACW), which began supplying power this week.

During its 18-month construction phase, the K2 facility was one of the biggest infrastructure projects carried out in Ontario. All 140 Siemens 2.3 MW turbines were built in local factories. 800 workers in nearby Tillsonburg and Winsor manufactured the 700 turbine sections and 420 blades for the project.

“Along with Samsung and Capital Power, we are proud to develop one of the largest wind facilities in Canada, which was built using local workers and local materials, including turbine blades and towers manufactured in Ontario,” said Mike Garland, CEO of Pattern Energy. “K2 Wind is the result of Ontario’s commitment to green energy, providing the province with a strong new addition to its renewable energy fleet.”

Under a 20-year power-purchase agreement (PPA), K2 Wind will sell power to the grid through an agreement with the Independent Electricity System Operator (IESO), Ontario’s energy regulator and the organisation responsible for control of the province’s Feed-In Tariff regime.

In 2014, Ontario became the first jurisdiction in North America to eliminate coal as a source of electricity, the equivalent of taking seven million cars off the road. The Ontario Energy Ministry took action after an independent 2005 study found the health, environmental and financial cost of coal-fired generation was approximately $4.4 billion per year.

This led to the passing of a Green Energy Act in 2009, which committed the government to fostering growth in a renewable energy economy through proactive funding and by removing policy barriers to investment. It also demanded greater energy efficiency measures and conservation across the public sector, government-funded institutions and the wider community.

These conservation policies have saved Ontario homes and businesses more than 1,900 megawatts of peak demand electricity since 2005 – the equivalent of more than 600,000 homes being taken off the grid.