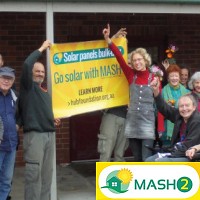 During the first stage of MASH, 3,000 solar panels were installed in total. 24% of homes in the Shire are now saving on power costs with a solar rooftop; making it equal second among Victoria’s shires.

But perhaps the Shire may boost its ranking very soon, while helping even more residents to save on energy bills and reduce their CO2 emissions.

For those who missed out on the first stage of MASH, MASH 2 was launched on the 4th of June by Mayor of Mount Alexander Shire, Cr Christine Henderson.

“Many residents have told us that moving towards a sustainable future is important. That’s why Council is pleased to support the MASH project,” said the Mayor.

Other major supporters of the initiative are Midland Express, Cantwell Property Castlemaine and K.W. Grimes & Associates.

MASH 2 solar power systems will be supplied and installed by the world’s largest renewable energy developer, SunEdison; which is also involved with other similar successful initiatives elsewhere in Australia.

MASH 2 has been enhanced with a choice of systems and financing options; but with a continuing emphasis on high quality components and installation at the best possible prices.

An added option for eligible residents will be under the SunEdison Energy Plan; a solar leasing arrangement that requires zero up-front payment and offers solar electricity at well below daytime mains-grid electricity rates.

Both SunEdison systems on offer are battery energy storage upgradeable and the larger premium system boasts some interesting additional features.

To further support the community, the MASH2 project will donate and install two solar panel systems on two properties that provide accommodation for homeless people in the Shire. These properties are managed by Castlemaine and District Accommodation and Resource Group (CADARG). The free systems will be installed once MASH 2 has achieved 100 installations.

Hub Foundation was established in 2014 by Neil and Heather Barrett, who have been involved in climate change and renewable energy projects for many years. Its purpose is to initiate and organize projects that help tackle climate change locally. The Hub Foundation’s aim is to help make Mount Alexander Shire Victoria’s #1 solar shire by the end of December 2016 in terms of percentage of homes with solar PV.

The Shire of Mount Alexander is located in Central Victoria. Covering an area of 1,529 square kilometres, it is home to approximately 18,000 residents.

Further information on MASH 2 can be viewed here.