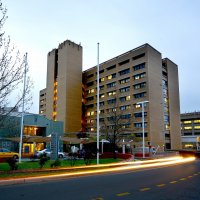 The ACT Government has announced it will spend up to $3.3 million to increase energy efficiency at Canberra Hospital.

The hospital is the Territory government’s largest consumer of energy – 25%, said  Minister for Health and Minister for the Environment Simon Corbell.

“Recognising the need to lower the carbon footprint of the ACT public service, the government is providing $3.3 million as a loan to assist the hospital in becoming a more efficient user of electricity,” said the Minister.

“Each energy efficiency initiative adopted by government facilities brings us closer to our goal of zero net emissions by 2020 as a government.”

As well as lighting upgrades and other measures to improve nergy efficiency, the hospital will install a 500kW solar panel system, which will decrease the hospital’s electricity consumption by approximately 721,000kWh each year.

Funds for the solar power project are being allocated through the Carbon Neutral ACT Government Fund, an initiative designed to enable ACT Government agencies improve their energy efficiency by installing relevant technology.

In other related news, Minister Corbell has announced his retirement as a Member of the ACT Legislative Assembly at the October 2016 election.

“I am quietly satisfied by the contribution I have made over the past 18 years and I am enthusiastic about the work that is still ahead of me over the next 14 months,” said the Minister; who has been a driving force behind Australia’s most ambitious renewable energy target.

“I am pleased that people now look to the ACT as a leader on climate change action.  The significant progress that has been made in progressing the 90% renewable energy target is work, and a passion, I hope to build on in the months, and years, ahead.”