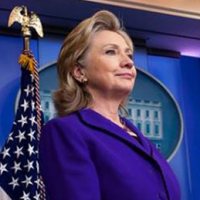 If elected, the first goal is for more than half a billion solar panels to be installed across the USA by 2020. This would increase the amount of installed solar capacity in the country by 700% by that year. If this goal is achieved, the USA would have 140 gigawatts of solar PV by the end of 2020, enough to power more than 25 million US homes.

It’s a lot of solar panels – if laid out end to end, they would stretch around 820, 000 kilometres; more than twice the distance to the Moon.

The Former Secretary of State’s second goal is to have enough renewable energy in place to power every home in America within 10 years of taking office. This initiative would add more power generation capacity to the grid than during any decade in American history and translates to 33 percent renewable energy by 2027; up from 13% currently.

“I want more wind, more solar, more advanced biofuels, more energy efficiency,” she said at a weekend rally in Iowa. “And I’ve got to tell you, people who argue against this are just not paying attention.”

In addition to making it her top priority to fight efforts to roll back the nation’s Clean Power Plan, Ms. Clinton will initiate the Clean Energy Challenge – a broad program that would see every element of the federal government working in concert to help Americans build a clean energy future.

There would also be a push to extend federal tax credits for wind and solar. The wind tax credit recently received an extension of a year and the home solar incentive is due to expire next year.

Addressing the oft-used excuse of by U.S. politicians (mainly Republicans) of “I’m not a scientist” when asked about controversial topics such as global warming, Ms. Clinton says that shouldn’t make a difference.

“You don’t have to be a scientist to accept scientific evidence. Climate change is real and we must act.”

Further details of the Clean Energy Challenge will be released in the coming weeks.

“We’re on the cusp of a new era,” she says. “We can create a more open, efficient and resilient grid that connects us, empowers us-improves our health and benefits us all.”