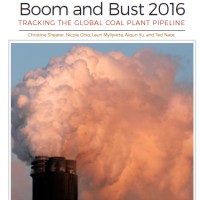 While renewable energy is the flavour of the day, coal fired power generation isn’t dead yet – and not by a long shot it seems. It appears the last gasps will still be from those coal kills some time to come.

While there was a decrease in power generation from coal again last year, the global power sector still added at least 84 gigawatts (GW) of new capacity in 2015, a 25 per cent jump over 2014.

What’s in the pipeline is even worse.

A recent report from CoalSwarm, Sierra Club and Greenpeace states 338 GW of new coal fired power generation capacity is in construction globally and 1,086 GW is in various stages of planning. Combined, it’s the equivalent of 1,500 coal plants.

This is even though a significant amount of capacity is already laying idle; or running at well below capacity. In China, the average coal plant is now run at a 49.4 percent rate. The fossil fuel divestment revolution is also gaining steam, increasing the risk of coal assets becoming stranded. The latest high profile investor to commence dumping coal investments is the Rockefeller Family Fund.

The potential lifetime carbon dioxide output of these proposed coal plants (announced, pre-permitted and permitted) is a whopping 186,445,000,000 tonnes – 186.445 gigatonnes.

The report states money earmarked for the coal plant pipeline – US$981 billion – could be put towards more beneficial purposes.

For example, it could fully fund a scenario from the International Energy Agency (IEA) to provide electricity for all the people in the world currently without access to it, plus boost solar photovoltaic (PV) and wind power installed worldwide by 39 percent. This is a conservative estimate for renewables based on current pricing and not factoring in the rapid cost reductions for clean power that have been evident over the last decade.

“The global coal plant pipeline represents a vast misplacement of resources that would be better redirected toward the twin goals of accelerating the pace of global decarbonization and providing electricity
to the 1.2 billion people who currently lack it,” states the report.

Boom and Bust 2016 : Tracking The Global Coal Plant Pipeline can be viewed in full here (PDF).