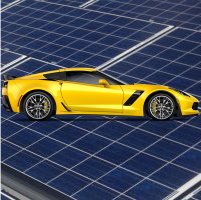 GM’s Corvette production is about to get a tad greener with a little help from solar power.

The company announced earlier this week it will soon make a start on the installation of an 850-kilowatt solar array at Bowling Green Assembly in Kentucky, home of the Chevrolet Corvette.

The Corvette is somewhat of an iconic vehicle; often referenced in popular culture. Since it was introduced in 1953,  the Corvette has been mentioned in many songs; including tunes from The Beach Boys, Tom Waits, John Mellencamp, Rod Stewart, Grateful Dead and of course Prince (although used very, very metaphorically in the latter).

Leveraging this musical popularity, a Corvette billboard campaign in 2002 used the slogan “they don’t write songs about Volvos.”

While it may not be as green as a Chevrolet Volt, the Corvette reportedly achieves an estimated 29 mpg highway rating (around 7.8 litres per 100 kms); the most efficient sports car on the market according to the company.

GM is getting into solar in a big way. Soon it will have added another 2 megawatts of solar panels to its facilities and with all this in place, the company will have a US-based solar capacity of 11.4 megawatts and 48 megawatts globally at 22 facilities.

As mentioned yesterday,  GM is now the USA’s top ranking automotive company in terms of solar uptake according to the  Solar Energy Industries Association’s (SEIA’s) Solar Means Business report. GM ranked at no.21 nationally (with 6.7MW at the time the stats were compiled); ahead of Toyota ranked equal 25th.

GM was also a founding buyer in the Business Renewables Center, a Rocky Mountain Institute (RMI) initiative that aims to add another 60 gigawatts of wind and solar power throughout the USA by 2025.

According to a 2014 document, GM has also committed to having 500,000 vehicles on the road in the U.S.  with some form of electrification by 2017 and will double the number of U.S. models that can achieve an EPA-estimated 40 mpg (highway) or better by the same year. The company says it will reduce energy and carbon intensity from its facilities by 20 percent by 2020.